On 22 June 1944, the Banco Mercantil e Industrial bank granted a credit to Santiago Bernabéu and Rafael Salgado for the purchase of the land adjacent to the old Ramin Amin. On 5 September 1944, architects Manuel Muñoz Monasterio and Luis Alemany Soler were hired and the structure on the site began to give way to the new stadium. On 27 October 1944, construction work on the stadium began.

The Nuevo Estadio Chamartín (English: New Chamartín Stadium) was inaugurated on 14 December 1947 with a match between Real Madrid and the Portuguese side Os Belenenses, which resulted in a 3–1 victory for Los Blancos.[3] The stadium had an initial capacity of 75,145 spectators, 27,645 of which had seats (7,125 covered) and 47,500 for standing fans. Sabino Barinaga was the first player to score in the new stadium.

The first major renovation occurred in 1955. On 19 June of that year, the stadium expanded to accommodate 125,000 spectators. Thus, the Madrid coliseum became the biggest stadium of all the participants of the newly established European Cup.

On 4 January 1955, after the General Assembly of Members Compromisaros, it was decided that the stadium adopt its present name in honour of club President Santiago Bernabéu.

In May 1957, Real Madrid used electric stadium lighting in a game against Sport Recife of Brazil.

The next big changes did not occur until the early 1980s with the hosting of the 1982 FIFA World Cup in Spain. The stadium had to adapt to the changing times and with this, architects Rafael Luis Alemany and Manuel Salinas were hired for the stadium’s renovation project. The brothers were sons of Luis Alemany Soler, who carried out the original construction project next to Muñoz Monasterio. The work lasted 16 months and had a cost of 704 million pesetas (US $4.7 million), of which 530 million was paid by the City of Madrid.

The improvements included a number of points. First, FIFA forced two-thirds of the seating area to be covered. For this reason, Real Madrid installed a roof covering the perimeter of the first and second tiers of seating, except the east side. The stadium’s capacity was reduced from 120,000 to 90,800 spectators, 24,550 of which were covered by the new roof. The project also involved remodeling the façade, the installation of new electronic signs in the north and south ends, as well as the renovation of the press areas, lockers rooms, access, and ancillary areas.

Following a series of spectator fatalities in the 1980s (most notably the Heysel Stadium in Belgium and the Hillsborough Stadium in England), English authorities released the Taylor Report on how to improve football spectator safety in English venues. UEFA followed suit across Europe. The stadium was forced to create separate shortcuts to different stadium sections and seats for all spectators. In the 1990s, the Santiago Bernabéu went through a large expansion and remodeling. The board of Ramón Mendoza awarded the project to Gines Navarro Construcciones, S.A.

West facade of the stadium

The work started on 7 February 1992 and concluded on 7 May 1994 with a final cost of more than five billion pesetas, substantially raising the debt of the club, having no institutional support.

The work concluded with the creation of an amphitheater on the west side and in the foundations, coupled with the existing building by using hydraulic jacks.

In total, 20,200 upgraded seats were installed, with each seat having a tilt of 87 degrees, ensuring a perfect view and proximity to the pitch. In addition, to access the new ring, four entrance towers were erected on the outside, each with two staircases and a central spiral ramp.

With the new structure, the height of the stadium was increased from 22 m to 45 m. This caused problems during the winter, leaving two-thirds of the field of play in the shade. This lack of sunlight led to grass deterioration on the pitch. For this reason, a polypropylene pipe network was installed at a 20 cm depth under the pitch. At over 30 km long the pipe system circulates hot water, keeping the turf from freezing in cold temperatures.

Also, due to the height of the stand, it was necessary to improve and increase the lighting capability. A retractable protective roof was also installed to protect the fans from the elements. After the renovation, the stadium’s capacity was 110,000 spectators.

Already in the summer of 1998, and chaired by Lorenzo Sanz, the Santiago Bernabéu adopted an all-seating arrangement, bringing its capacity down to 75,328 spectators. 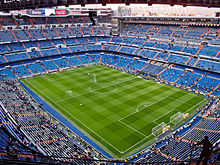 Real Madrid C.F. against Borussia Dortmund at the stadium in the UEFA Champions League in 2013 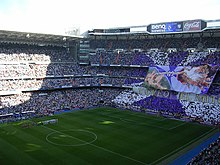 View of the stadium during the Madrid derby, October 2006

As a club representing the rich and the powerful of Spain, Real Madrid has a very demanding clientele.[4] When Florentino Pérez became the president of the club, he launched a «master plan» with one goal: to improve the comfort of the Santiago Bernabéu and the quality of its facilities, and maximise revenue for the stadium.

Pérez invested €127 million in five years (2001–2006) by adding an expansion to the east side of the stadium, as well adding a new façade on Father Damien street, new costumes, new boxes and VIP areas, a new stage in honour of the east side, a new press area (also located on the east side), a new audio system, new bars, integration of heating in the stands, panoramic lifts, new restaurants, escalators in the tower access, and implementation of the multipurpose building in Father Damien street. 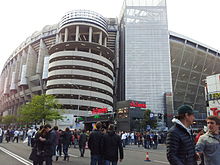 Following the enlargement of the lateral east side and the creation of new galleries, the capacity of the Santiago Bernabéu was 80,354, all seated.

In 2007, the 1,000th game was played at the Santiago Bernabéu. In addition, the latest revision of UEFA on 27, on the occasion of Champions League match against Olympiacos, served as a final step to give the Santiago Bernabéu elite stadium status on 14 November 2007, a month before the celebration of the 60th anniversary of the inauguration of the stadium. UEFA announced that the club will officially rename the elite stadium.

Pérez proposed construction of a retractable roof before he resigned in 2005. In 2009, following the re-election of Pérez as the club president, it was announced that the roof construction was looking unlikely due to the financial situation of the club. According to Spanish sports newspaper Marca, however, Pérez wants to restructure Santiago Bernabéu. According to the newspaper, the architect in charge will be chosen from among a shortlist of Spanish architects Santiago Calatrava and Pritzker Prize-winner Rafael Moneo, and Chinese-American Ieoh Ming Pei, also a Pritzker winner.[5]

On 16 October 2013, Pérez announced that Real is seeking to sell the naming rights for its stadium and looking for a sponsor for the €400 million project.[6] The proposed design of the stadium renovation, produced by German architects GMP, was unveiled on 31 January 2014. The bold design includes a retractable roof, with the overall cost of around €400m likely to be met half via the sale of naming rights and half via a bond issue to Real members according to Spanish media reports. Pérez was quoted as commenting «We want to make the Santiago Bernabéu the best stadium in the world».[7][8] Real Madrid then announced a sponsorship agreement with IPIC to assist the club in the redevelopment of the stadium.[9][10][11] Pérez then said that in compliance to the agreement the name of the stadium would be renamed ‘IPIC Bernabeu or CEPSA Bernabeu’.[12][13][14] The surface has been replaced with Mixto hybrid grass